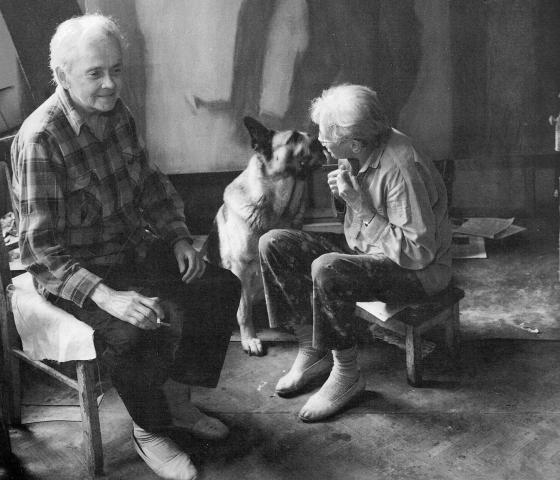 The painters Jitka (1922-2011) and Květa (1922-1998) Válová, sisters from Kladno have been awarded the title Dames of Czech Culture. The posthumous honor was awarded by the minister of culture, Antonín Staněk, as part of the 13th annual international festival Mene Tekel. A medal with an emblem for painting is to be accepted on 24 February, 2019, by Marie Vydrová, representing the Válová family.

“Květa Válová and her alter-ego Jitka Válová are a unique phenomenon in the domestic context, where they were mistakenly considered marginal. Their vitality, non-feminist toughness and non-intellectual approach differentiates from the predominant estheticization, moralizing and speculativeness of Czech fine arts.”

The painter twins Jitka and Květa Válová are unique on the Czech and the world scene. They belong among the most significant Czech artists of their generation, and at the same time, they have stood outside the trends of their time. The industrial city of Kladno became the birthplace of the “Válovy” on 13 December, 1922. After the Second World War, they studied together at VŠUP in Prague under Emil Filla. In the 1960s, the expressive “dark and starkly constructed” (J. Chalupecký) paintings by the sisters attracted the attention of art historians and critics. During this time, they had their first, as well as their last exhibitions.

“Above all, [Kladno] gave us the idea that we would never have anything but shit. But Kladno was formative for us, as well, of course, mainly in the beginning. After finishing school, we went into the mines and the mills and worked hard. We drew and painted, some dapper boys could not fail to inspire us. We lived among them.”

Both painters have become legends in their own way, whether for their unique creations, the unique monumental scale of their expressive canvases, or their free, unsentimental way of life. In the 1970s, both painters were part of unofficial art circles. Their lives in the outskirts of Kladno, isolated from Prague, saw years of deprivation. During normalization, the sisters were forced to live in seclusion, unable to exhibit, no purchases from the galleries, no orders for new works, sustained only by their close circle of friends.

Jitka Válová, in an interview for the website nekultura.cz, remembered it this way: “Although later, for example, Mr. Seker of Louny bought some of my pastel works, and the Gallery of Central Bohemia did, as well. During the purchase, where there always had to be someone from the communist party present. They always had to make him drunk, and afterwards they plucked out for purchase the works that the communists would never approve.” In the 1980s, with the arrival of postmodernism in reaction to the rational approach of conceptualism, young artists again began doing expressive figure painting, like the transavantgard, new painting, and the new savages. After the period of the happenings, working with geometry and text concepts again returned with the desire for pictures with a painterly quality.

The work of both sisters, their dynamic painted surfaces, with their symbolic levels and mythic connections naturally resonated with this movement, across generational lines. In the 1980s, after a 20-year silence, there was presented a large exhibition of their works, put together by Jana and Jiří Ševčíkový for the Gallery of Fine Art in Cheb, Karlovy Vary, Ostrava nad Ohří, and in Roudnice nad Labem. Jitka Válová, in an interview with Tyden reminisced with a personal joke, that after 1989, it was harder to paint: “It’s always easier to paint against something. Communism was a great whip, because it always vexed me.” After their work received a number of awards, their paintings became, beginning in the 1990s, part of many significant exhibitions at home and abroad. The work of Jitka and Květa Válová, without undue exagerration, belongs in the context of modern European art.

The international project Mene Tekel is a noncommercial multidisciplinary festival against totalitarianism, to sustain the national memory. The name of the festival refers to the mystrious biblical parable of Mene, mene tekel úpár-sín, which loosely denotes the judgement of one’s deeds at the end of one’s life. It is not by chance that Jitka and Květa Válová have been bestowed the honor of Dames of Czech Culture.

The director Ester Krumbach wrote about the sisters perhaps the most effective description: “I was writing and saying things to them that noone else could understand; they just didn’t get it. They had nothing to lose. Never did they do anything or collaborate with anyone. It was enough for them to paint, which was a problem, because the passage of time, they were forced to buy eyeglasses. A single pair. One used them, then the other…”

In 2017, the Agosto Foundation partially funded the work of curator and artist Dagmar Šubrtová in the revival of the family home of the sisters Jitka and Květa Válová in Kladno, as well as a conference on the question of artist legacies, which remains unresolved.

In collaboration with Dagmar Šubrtová on this occasion, a selection of archival materials has been digitized and made available to the public in the Agosto Foundation Mediateka.

In March 2018, the heiress of the estate, Mrs. Marie Vydrová, collaborated in a test opening the studio of Jitka Válová to the public. The studio where Jitka Válová worked during most of her live is still preserved almost in its original state. Visits may be arranged by contacting the following address: dumvalovek@email.cz.