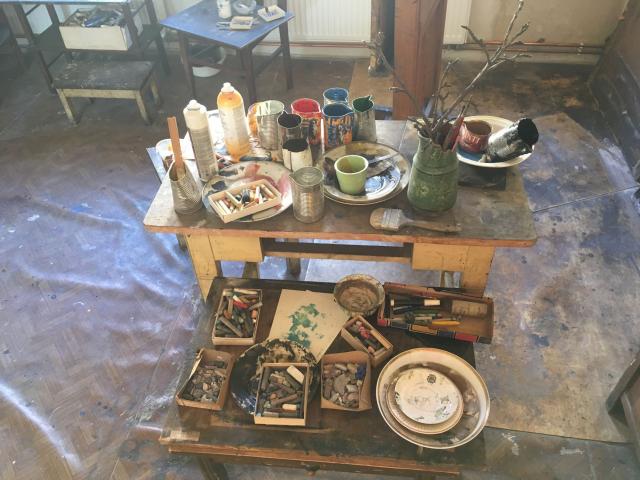 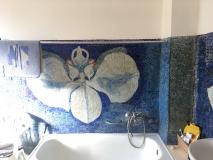 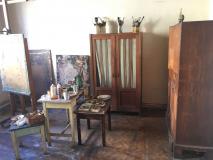 On 20 March, 2018, at 2 PM, there will be an unveiling of a memorial plaque at Bendlova St. 6 in Kladno at the house where the sisters Jitka and Květa Válová lived and worked for most of their lives. This will be accompanied by the public opening of Jitka Válová’s studio, with the support of the Agosto Foundation’s Perpedes Grant Program.

The twins — or ‘Válovky’ as they were known in public and among friends — once lived in the building of the Kladno savings bank where their father, a graduate of the business academy, had previously worked. In 1938, the family moved to Bendlova St. 6, and Jitka and Květa spent the rest of their lives there. It was a small house, but they had space for their studios and even a small garden.

After any exhibition opening at Kladno’s Gallery 55, the Válová sisters would often hold their own gatherings in the living room of the house, and any spillover would move to the nearby studio. The neighbors often visited, as did their friends and other artists. The Válovás would engage in friendly, boisterous conversation and candidly offered their opinions. They would also reminisce about their time in forced labor at Kladno’s Poldovka, as well as their studies at Prague’s Academy of Arts, Architecture and Design under the tutelage of Emil Filla, or muse on contemporary social topics.

Jitka Válová’s studio, where she created most of her work, has remained virtually intact to the present day. Just as it was during the sisters’ time, the living quarters of the house preserve a glass mosaic with an orchid motif; and the living room, despite minor changes, still holds the same ambiance conducive to artistic debates. The heirs of their estate mentioned this and, at the behest of Kladno-based artist Dagmar Šubrtová, a long-time friend Jitka, and their relative Marie Vydrová, it is now possible, by email appointment, to visit the studio beginning on 20 March, 2018.

As part of its Perpedes grant program, the Agosto Foundation supports the opening of the studio, and the public now has the opportunity to see it in its original state. Visitors may now experience the atmosphere created by these two exceptional artists of their generation, while also opening up discussion about their estate within the context of their hometown of Kladno. In cooperation with Šubrtová and Vydrová, the Agosto Foundation has initiated a dialogue about the possible options for the structure where the Válová sisters worked and lived, and about the handling of the artifacts which they have left behind.

In order to fully appreciate the artistic legacy in their native Kladno, and to preserve their estate for future generations, it is necessary to pique interest and find a willingness to offer financial investment, both from local institutions, as well as from large cultural bodies such as the National Gallery and the Ministry of Culture. There are two meetings planned for 2018 with experts and interested stakeholders, and we will inform readers about both of them through our newsletter.

You can arrange a visit to Jitka Válová’s studio by emailing: dumvalovek@email.cz